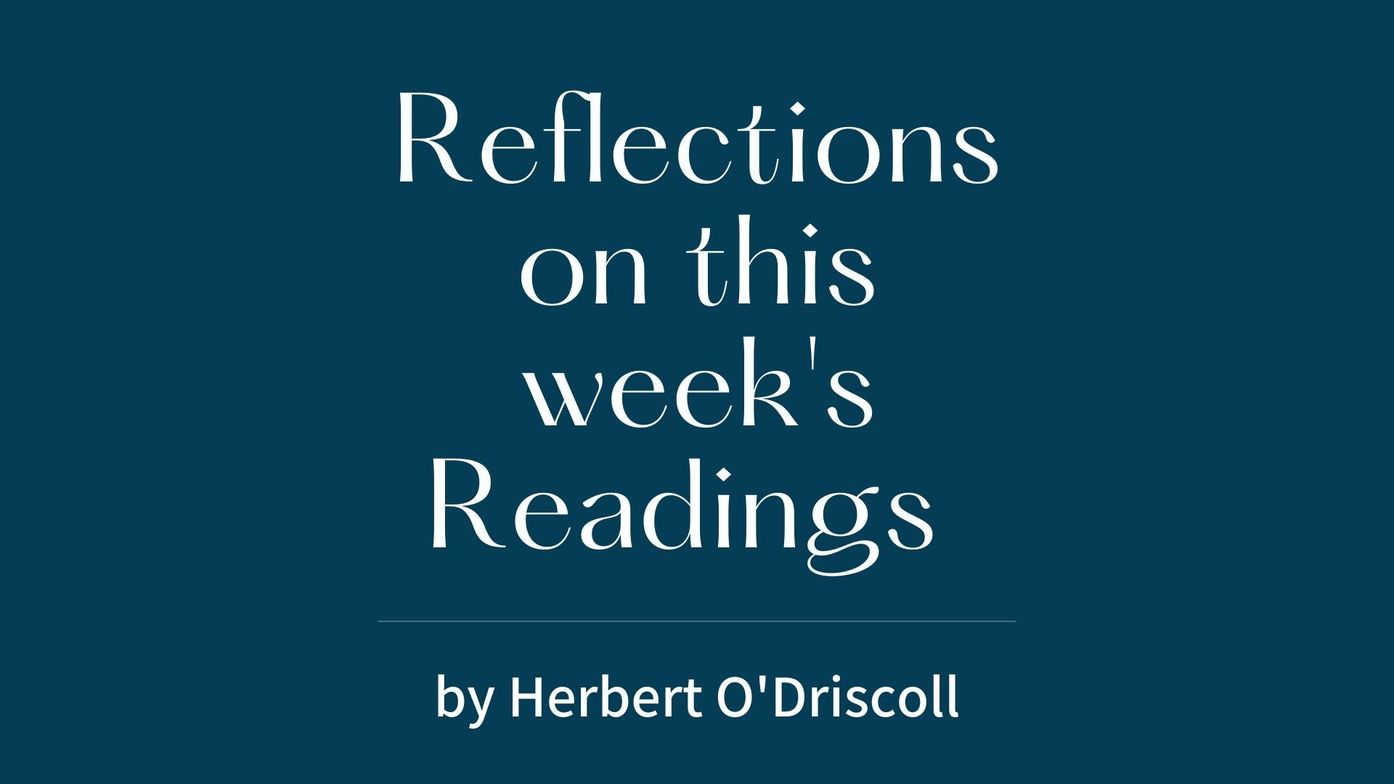 As Elijah feels his own life ending, he realizes that the younger Elisha is finding it difficult to accept this. Once again, this is magnificent storytelling so I'm going to stay with it a bit longer.

After reading the passage - even though, like you, I know it well, I ask myself a question I always ask before doing these notes -  what is this story about? Why has it lasted down through time? It must be saying something far more than - as in this case - an encounter between two long ago individuals. It must be saying something universal about human nature. I decide it's about wrestling with our own immaturity. - all of us. Then I try to tell the text in a way that could be true in any age. Human nature doesn’t change.

THE FIRST READING
2 Kings 12, 1-2, 6-14
Elijah knows that his days are numbered. The struggle for the soul of his country has been costly. For some time he’s been training the younger Elisha to succeed him. There comes the day the older man feels he should begin stepping back from the relationship.

"Stay here for the Lord has sent me as far as Bethel," he says to Elisha. Suddenly he realizes Elisha doesn’t want separation. "As the Lord lives, and as you yourself live, I will not leave you." This is code language for “Pease, don’t die on me! "Elijah realizes this is not going to be easy. He backs off. The two of them go together. Other similar incidents follow. In each one, Elijah accepts the younger man’s anxious company.

On these journeys, the two are followed by a group of young men. They call themselves prophets. We're not sure what their role was in that long-ago society. All we know is that in this case, they set out to torment Elisha. They focus on his great fear of losing his mentor.

We could give this group a very different identity. They could be Elisha's own inner voices expressing his fears.  We all know these voices in our own lives. However we think of them, they cruelly voice Elisha's deepest fear. "You know your master is going to be taken from you, don't you". Frantically Elisha tries to quiet the voices.  We all try to silence our inner voices when we don't want to hear what they are saying to us. Like Elisha, we say “Be silent”. But we all know how very hard it is to silence inner voices.

The two cross the Jordan into a lonely tract of countryside. The older man knows this must be the time to force Elisha to face the reality he fears so much. Bluntly he speaks of his impending death, then asks “what do want me to do for you.”  In utter panic Elisha asks that he needs twice as much ability and gifts to be half as good as his Master.!  Elijah looks at him, then says very kindly "You have asked a hard thing. He's too kind to tell Elisha he’s asked an impossible thing. We simply can’t appropriate another person's gifts. So Elijah says something very kind and wise. He tells Elijah that if he faces this moment of bereavement, showing at last that he has the maturity to do so, then he will be given the gifts and the strength and the wisdom he wants so much. If he fails to face the moment, then he cannot have them. What the older man is really saying of course is that if Elisha faces this moment he will, find in himself the gifts he needs to continue Elijah's work.

Suddenly death takes Elijah. The description of his death is magnificent. Desperately Elisha takes his mentor's cloak and clasps it to himself. He now must face a test, still being taunted by his voices. Can he cross this ford of the Jordan as confidently as Elijah? Apparently, he does. The storyteller says simply "Elisha crossed over."

This is a beautiful and succinct description of what has happened. Elisha has passed over from immaturity to maturity, from fear to courage, from self-doubt to self-assurance.

All of us know such moments because we all are constantly passing from one stage to another ourselves, or we are helping someone else - a friend, a child, a partner - to make a transition, to cross over. The crossing may be from indecision to decision, from innocence to sophistication, from grieving to new life, from freedom to responsibility, from fear to confidence - the list is endless. Those three words “Elisha crossed over”  are an example of how many levels of meaning can be found in a seemingly simple Biblical text.

A wonderful story, not just about a long-ago Biblical figure, but about ourselves and everyone else we know, the story of our maturing.

THE PSALM
77: 1-2, 11-20
The poet is having difficulty sleeping. "My hands were stretched out by night and did not tire". Such sleeplessness is almost always accompanied by the fears and anxieties of the night. “My soul refuses to be comforted”. He now tries deliberately to change the direction of his thoughts, to direct them away from himself and his concerns to the role of God in his life. "You are the God who works wonders….you redeemed your people….made the waters afraid…led your people like a flock”. So often in the psalms, this choice is offered - reaching for God as the focus of our thoughts rather than the fascination with self. “I will meditate on all your acts”. Not easy to achieve but, where it can be achieved, very good soul medicine.

THE SECOND READING
Galatians 5:1,13-25
For freedom, Christ has set us free. Paul is pounding this message home. He mentions freedom again and again. He knows that there are always those ready to welcome freedom as unbridled license. Paul names this as self-indulgence.

Freedom is a complex concept. When the huge demonstration took over much of Ottawa there were many, even some who supported it, who were vague and puzzled about what their slogan FREEDOM meant. What should be uppermost - desires or aspirations? Things that pull us downwards or things that call us upward. Paul offers a list of both of these properties or marks of the human spirit. Don’t just run your eyes through these lists. Take time with them, after all these things are those elements in human life that can make all the difference between a life diminished by fascination with the Self and one empowered and enriched by fascination with the grace of God.

THE HOLY GOSPEL
This whole passage is full of wonderful insights about vocation. Jesus set his face to go to Jerusalem. He doesn’t want to go but he feels he must. Wary of what may happen as he travels south through Samaria, he sends scouts ahead to test the reception. Luke tells us Jesus was right. They did not receive him. John and James lash out in anger. Jesus cuts them off. Perhaps he is teaching us all to choose our moments of confrontation and to be in control of how we respond.

But some do receive Jesus, some who actually wish to offer themselves as disciples. Jesus' responses to them are very interesting. A man says "I will follow you wherever you go". There is a hint of an overeagerness, a failure to realize what it could mean to do this.  I suspect this offer ended there.

With another person, Jesus actually initiates an invitation to follow him. It is quite possible Jesus and he had met before, that Jesus felt there was material here he could use. When this person says " First let me go and bury my father" - in that society a huge obligation - I don’t think Jesus' reply necessarily means he was refusing the man’s offer of discipleship. I wonder if Jesus was saying that we should be aware always that the future can have just as much a call on us as the past. What do you think?

The third approach. From what he says I think it likely he heard the previous conversation. Very straightforwardly he asks Jesus to accept his going home first to say goodbye. I think Jesus' response to him is very significant.  I don't hear not as a rejection from Jesus. Somehow I think that Jesus is acknowledging that this person realizes the seriousness of following Jesus. “No one who puts his hand to the plough and looks back is fit for the kingdom of God”. I can almost see the man nodding and saying, "Yes Master, I realize that."  My hunch is that Jesus accepted him as a follower. Again, what do you think?