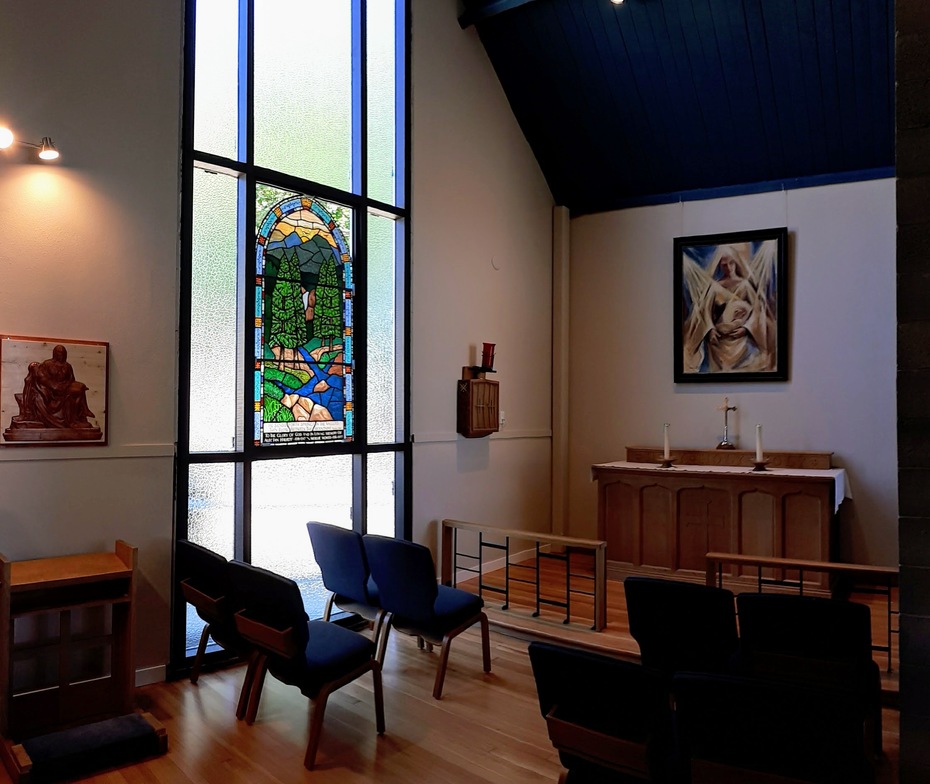 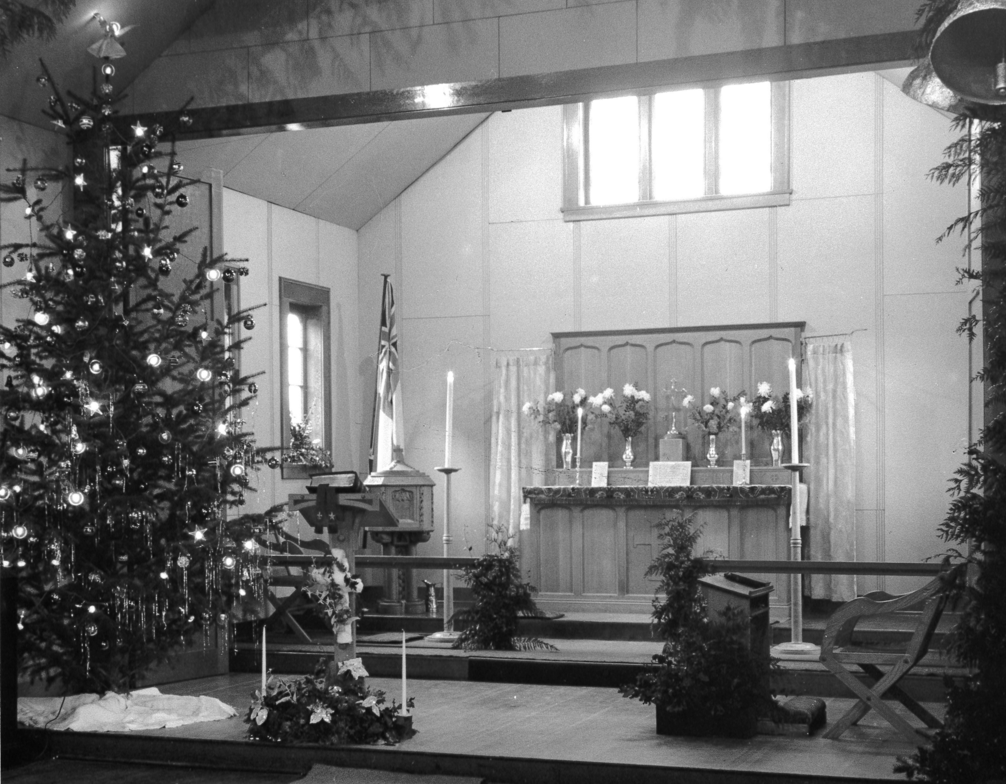 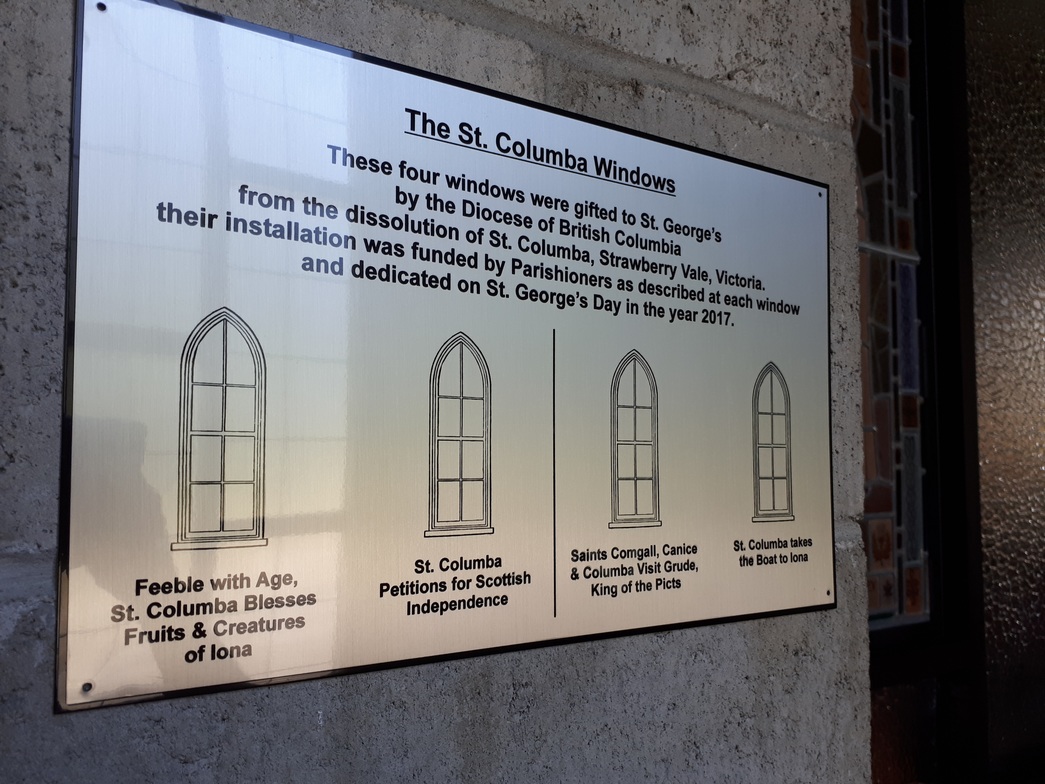 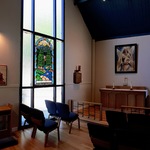 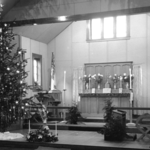 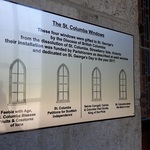 One of the most beautiful, but perhaps under-utilized, spaces in our church is The Lady Chapel. As such, it has been a great joy to give this space a much needed face-lift over the month of July.
The refurbishment was sparked by the need to replace the large floor-to-ceiling window on the East wall, as it was leaking and beginning to rot. It was quickly decided that the St. Columba “Psalm 104” Window (the “surprise” fifth window in the series) would be the perfect addition to the new window, and while we’re at it, why not a fresh coat of paint, too? As you can imagine, the project quickly grew once we discovered the beautiful hardwood floors under the old carpet. In the last month, the window has been replaced, the walls have been washed and painted, the floor has been re-finished (don’t worry, it’ll take about a year, but the hardwood will darken to match the church), and some of the special items in the space have been cleaned or re-furbished.

Our hope is that the fresh, bright space will be used for small mid-week services, and small memorials or weddings. We also hope that parishioners will feel more drawn into the space for private prayer.

Let us draw your attention to a few of the special items that can be found in your newly refurbished Lady Chapel:

“Mother and Child” by Barbara Burns

The painting of “Mother and Child” located above the altar was painted by local artist and long-time St. George’s parishioner Barbara Joan Burns (1920 – 2013). Barbara was born in Spokane, Washington, but moved to Victoria in the 1940s where she married and raised a family. She started attending St. George’s shortly after her arrival and was a loyal parishioner for well over 65 years. She was an accomplished artist and one of the co-founders of the Community Arts Council of Victoria. Upon her passing, she left a body of work to the church, as well as a large bequest to support the continuing creation and preservation of art in the parish. The painting was cleaned and re-framed in order to prepare it for its new position above the altar. An explanatory plaque can be found on the pillar between the St. Columba Windows.

This piece is a St. George’s original. It was given to the church by Mrs. Marion Sherman, pre-1948, in memory of Lizzie Jean Bostock (1860-1942). The black-and-white photo above shows the Communion Table circa 1948 located in The Mission Church (the original building on site) at Christmas.

The beautiful silver cross on the altar was also given pre-1948 by Bernard and Mary Goward, in memory of their parents, and can also been seen in the photo of The Mission Church above. The cross was cleaned and re-dipped to restore it to its original brilliance.

The beautiful windows that separate The Lady Chapel from the Choir were acquired from the dissolution of St. Columba, Strawberry Vale (2012), and installed here in April 2017. These windows were created by local stained-glass artist Michael Nuttgens between 1985 and 1992. The installation of each window was sponsored by a different St. George’s parishioner or family, and each window has a corresponding plaque mounted beside it. On the centre pillar, you will find a plaque that describes the name and scene on each window. The four windows depict the life of St. Columba. On the opposite, exterior wall, the “Psalm 104 Window” is the fifth in the St. Columba set. While it doesn't fit into the St. Columba story, it's perfectly placed on the exterior wall as it depicts the images from Psalm 104: He sends forth springs in the valleys; they flow between the mountains.

The Wall of Thanksgiving and Gifts

On the North Wall, a new custom-built shelf has been installed to host The Register of Memorial Gifts and the St. George’s Book of Service (to be added to the shelf on Remembrance Day 2017). We encourage to you flip through these books at any time and remember all those who have made contributions to this parish through their generous donations, and contributions to this country through their service. You will also find on this wall a framed commemorative list of those St. George’s parishioners who fell in the two Great Wars.

On the East Wall, mounted above the prie-dieu (often called a litany desk), a custom-carved relief image of Michelangelo’s work The Pieta can be found. Many will recognize the unforgettable image of Mary holding the body of Jesus after the Crucifixion; the original Renaissance work can be found in St. Peter’s Basilica in Vatican City. The addition of this image is to acknowledge the full meaning of Mary’s story: her joy at the birth of Jesus (as depicted in the “Mother and Child” painting) and her sorrow in his death. The Pieta means “the pity.” This space has been created as a special place of prayer for those seeking comfort.